IN THE FACE OF FEAR 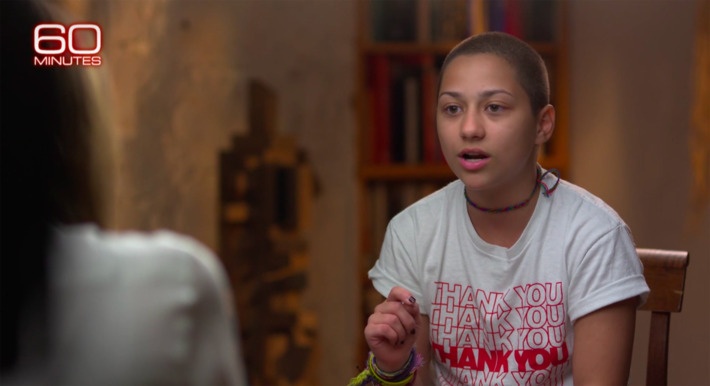 It’s so damn thrilling to watch these young people in the March for our Lives movement come forward. I keep asking myself, ‘Who ARE these young ones that have learned to claim their voices at such an early age? How did they grow so strong so quickly?’ It’s mind-boggling to watch their apparent fearlessness; to witness their bold, unapologetic ability to speak their truth to power, to challenge convention, to demand to be heard, to refuse to accept any less than that.
I hope and pray from the bottom of my soul that the world hears them and follows their sage advice. In addition to their particular fight, though, I’m really interested in how these high school kids got to be so strong, so vocal, because that’s what I long for. That’s what I want to do more of in my life and what I want to help others to do.
Emma Gonzalez, one of the most recognizable faces of the #Marchforourlives movement, says she didn’t have a choice. Her face and her words were plastered across the airwaves and made public before she had any chance to think about the repercussions. I’m not advocating for ‘speak first; consider later.’ That’s not very yogic. It doesn’t reflect thoughtfulness or mindfulness. However, the fact that she didn’t let her fear stop her — THAT is powerful.
What would you do in your life if you were not afraid of the outcome? How do we live from that place more often? Because when we do there is sooo much life force! I think of the moment I jumped out of an airplane just a few years ago. That minute of free fall was one of the most memorable and exhilarating moments of my entire life. If I had let fear win, I would have denied myself that incredible experience. I think of a moment years ago when I was understudying Kathleen Turner on Broadway and I finally went on — the terror that accompanied those first few minutes on stage and the tremendous feeling of victory that came as I continued. So many of my most ‘alive’ moments — moments I’m most grateful for, moments I think of as times when I was most myself — they are all moments in which I conquered fear; moments when I conquered something inside me that wanted to hold me back and keep me small and safe. Every time I have managed to act in spite of my fear has been a growth moment; a moment when I became more myself, more Jurian.
I am not fearless. I am one who has learned — and who continues to try to learn — to act in the face of fear. Some of those moments have been grand ones — like jumping out of an airplane, stepping onto a Broadway stage, yes. But just as memorable, just as life-changing are the unwitnessed moments — when I ended my marriage, when I left a job that no longer served me, when I listened to someone who was angry with me and didn’t close my heart. I remember these, too, as moments that shaped who I am. For every one of them I’m grateful. I’m grateful for the part of me that won out over fear.
Fifth Chakra Yoga (Yoga of Voice) is about claiming the parts of us that need expression, that deserve expression. Acknowledging them, honoring them, and giving them voice. Because the world needs us to be us. The more we do that in our own lives, the more our nervous systems learn to do it again. And again. And again. The more we do it, the more we inspire someone else that they, too, can do the same. I want more Emma Gonzalezes in the world. She moves me, that young woman. She inspires me. She gives me hope. If an 18-year-old high school senior thrust into the spotlight without preparation can rise to this impossible occasion, imagine what I can accomplish, who I can be. Imagine what you can be.
Join me April 20 – 22 at Kripalu for the Fifth Chakra Yoga (Yoga of Voice) and inspire yourself.

Watch the entire 60-Minutes interview with the Parkland teens here.