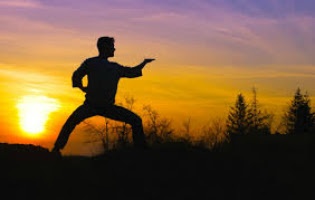 The word warrior may initially bring to mind the image of a soldier, a combatant, a heartless killer dedicated to destruction. But a warrior is also described as one who shows great vigor or courage; a champion. This definition — a champion — conjures up the image of a brave and loyal friend; an ally; a defender; an advocate. This is the Compassionate Warrior, one who shows up, one who is willing to take a risk to defend what they love; one who protects, who shields, who boldly upholds that which is worthy of safeguarding.

The Bhagavad Gita is one of yoga’s principal texts. In this 2,000-year-old epic Indian masterpiece, God (Krishna) implores — and finally convinces — a young celebrated warrior, Arjuna, to fight a war he does not want to fight because the opponent is his family. During their conversation, Krishna, exemplar of compassion, tenderness and love in the Hindu tradition, argues that sometimes it is our sacred duty to fight — not to walk away, not to hide our head in the sand, not to let somebody else do the fighting for us, not to sit in lotus position and chant om — but to actually FIGHT.

This appears to be one of those times — a time when we are each asked to clarify for ourselves what we believe in and to stand behind those values in our words and in our actions. I stand for equality — between skin of various shades, male and female, rich and poor, those who love women, men, and both. I stand for the sharing and protection of resources. I stand for a belief that the planet and all its life forms have intrinsic value apart from their usefulness to human beings. I believe our world is better and safer when we take care of one another. I believe those who succeed and thrive have a moral responsibility to help those who don’t.

I also believe that it is my responsibility to voice these beliefs when they are challenged. It is my sacred duty to fight for these beliefs through whatever means I can — discussion, public forum, letter-writing, bumper-sticker display, sign-making, canvassing and voting. It is my sacred duty to not be passive, to not stand on the sidelines, to not ignore the battle that is waging, to not throw up the white flag, to not pretend the battle is not mine, because the battle that is going on now demands that we each take a stand. We must each ask, Am I for equality among all colors, races and sexes, or am I not? Am I for the sharing of resources or not? Am I for the protection of the planet or not? Am I for reaching out and helping others less fortunate than I or not? Because if we do not recognize that this is our sacred duty the battle will continue, regardless, and when it is over and we have not participated we will wake up in a world in which equality is not valued, resources are not shared but hoarded, and the planet exists solely for the benefit of a few.

We must each speak our truth with compassion, even and especially in the places and to the people who do not agree with us. We must take up our sacred duty with brave and open hearts, willing to listen and to love, but not to walk away. This is the yogic way. The way of the compassionate warrior.