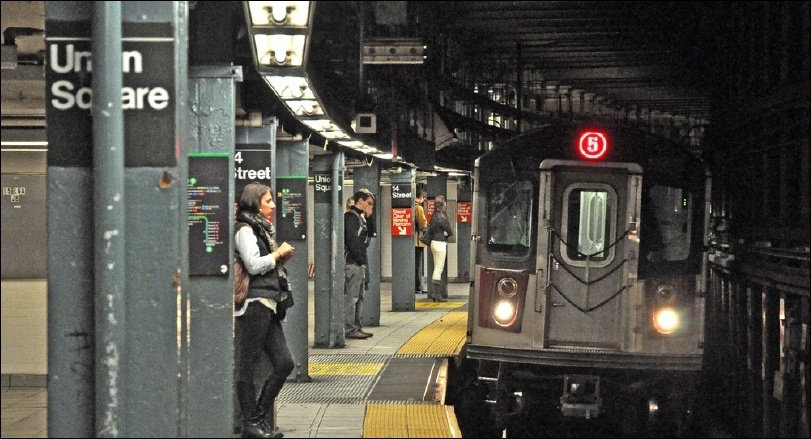 I’m not afraid to say it. I love the New York City Subway. I moved to New York City for the first time in 1986, and for the thirty-two years since then, I’ve been carrying on a deep, if somewhat complicated, love affair with its underground transit system.

What do I love about it? So many things. The wafting smells that brazenly accost you without warning. The grating, high-pitched squeals that make you suddenly throw your hands to your ears. The constant, yet ever-changing motion that threatens to nearly pitch you off your seat at times. The steady stream of human entertainment. The absolute certainty that you will be surprised by the unexpected. The unrivaled opportunity to people-watch. The possibility of momentary intimate connection with people you might not otherwise ever speak to and whom you will likely never see again.

This is perhaps the quality I treasure above all others. In a city where there is such an abundance of anonymity, the Subway provides a place where people of varying age, gender, race, economic-, cultural- and political-background are thrust together in one place long enough that they forget (either innocently or by act of sheer willpower) that they are among others, and as a result they often allow themselves a kind of relaxed privacy in public. They let their guard down and find a way to coexist in a shockingly, overwhelmingly peaceful state (all things considered).

I’ve seen people do things on the subway that you’d only expect them to do behind the closed doors of their bedroom or bathroom. That’s not always been pleasant, to be sure, but it is interesting. I’ve watched a couple groom one another like chimpanzees. I’ve seen women put on full faces of make-up and hair (I confess, I’ve been guilty of that, myself). I’ve seen men cut their nails, people eat dinner, break up, get back together, do their taxes, sleep, dance, jerk off, entertain, study for a test, be kind, be cruel, be mindful, be thoughtless.

Some of my favorite and most memorable moments of my life have occurred on the Subway. And I suspect I’m not alone. There is the Safety of the Present Moment on the Subway. People will do things they might not otherwise do because they are so aware of the fleetingness of the moment. There is a tacit understanding, which everyone shares, that the car is moving, people will get on and off, and they will likely never see these same people ever again. I think because of that, the Subway is one of the few places where people are somehow at peace with the passing of time, at peace with the inescapable truth that everything changes. Somehow on the subway that is acceptable, maybe even comforting. And because of it, strangers allow themselves to connect to other strangers. 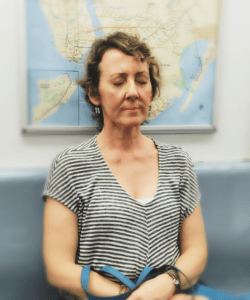 I met a young man on the Subway last weekend, when I was in NYC visiting friends. (I asked him to take this picture.) I said, “Wait till my eyes are closed. I’m supposed to be meditating.” Ha ha! As I said this to a total stranger, I thought, Isn’t that interesting, You’re passing your $800 iPhone to a stranger and saying “Here, Take this while I close my eyes.” He thought it was quite funny as well. He said, “Meditating? How can you meditate here? It’s so loud!” And I explained that, for some, the loudness makes it easier – there’s so MUCH to block out that the mind just surrenders and drops in. He thought that was quite intriguing. I told him about my long love of the Subway and how it was even more wonderful before the time of Smart Phones – back when people were more apt to talk to one another instead of their devices. He was 18 and originally from Liberia and could hardly imagine any of that. And I was so thankful for the opportunity to talk to him. Him a young man from Liberia with headphones on, minding his own business, and me a middle-aged white American yoga lady.

My short but treasured trip on the Subway made me think of Swami Kripalu and the practice he had of naming his most cherished possessions. Not that he had many. But his pen, his desk had names because they were alive for him. He had intimate relationships with them. This is how I feel about the New York City Subway. It is a living, breathing animate thing for which I have a deep, if somewhat complicated, abiding love. And aren’t these the things that make our lives worth living?

If you have a cherished New York City Subway story and are willing to share it (or if you know someone who does), please contact me at jurian@jurianhughes.com. You can help me bring to life a dream I’ve had for a long time!

Happy End of Summer. May you relish it with all the gratitude and love it deserves,